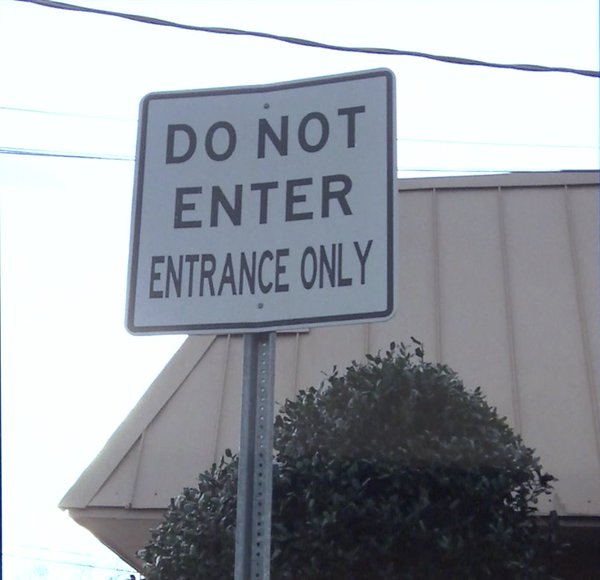 I had a doctor’s appointment last week. When I approached the office front door, there was a handwritten sign indicating the lobby was closed for repairs, and that I was to use the second entrance on the right.

I stared at it for a moment. From where I stood in the hallway, facing the door, the elevators were to my right. There were no other doors in that direction. I didn’t know where to go.

Patrick Moore reveals in his article “When Politeness is Fatal: Technical Communication and the Challenger Accident” (1992) that “association clues require that the speaker and hearer share some specific knowledge based on past mutual experience or some common element in their background” (Moore 1992). Interpersonal communication, then, is informed by shared knowledge.

I mean, yes, of course it is, but until I read the article, I’d never heard it articulated, nor had I thought about it in the context of my own experience. Here was yet another gem relating to interpersonal communication that had escaped me. No wonder people still occasionally look at me askance when I change the subject. The jump may make sense to me, but I’ve left our common ground behind and struck out on my own, and the necessary shared context is lost.

“Association clues require that the speaker and hearer share some specific knowledge based on some mutual experience or common element in their background.” – Patrick Moore

The miscommunication upon which Moore focuses is that which occurred on the fateful morning of the Challenger disaster, when the engineers at Rockwell International (the company that helped design and build the space shuttle), upon facing an array of superiors at NASA bent and determined to launch the damn shuttle after weeks of false starts and delays, underplayed their misgivings about the launch (due to a factor unrelated to its failure, which must be mentioned). Their ambiguity enabled NASA to presume that they were approving the launch, even though what the engineers had meant was exactly the opposite (Moore 1992).

Moore makes the argument that the unwillingness of the Rockwell VPs to be “impolite” (blunt) ultimately doomed the Challenger. From my perspective this seems unfair, since the Challenger launch failed for reasons unrelated to their concerns. And it seems a bit facile for him to make assumptions from his six-years-removed viewpoint; in hindsight, people are always sure they’d do the right thing, despite the fact that doing the right thing in the face of uncertainty and pressure is much harder than it sounds, as anyone who has succumbed to the bystander effect knows.

In my case as an ASD, I usually have the opposite problem from the Rockwell scientists. I have to build in vagueness to what I say and soften and dilute negative opinions when expressing them so people don’t think I am an odd, uncouth, blunt, rude, or otherwise unpleasant person. Apparently, normal people don’t ever express truly negative thoughts about anything. It’s almost like a game for me now, to see how ambiguous I can be and still get my message across. (If anyone is wondering, I still haven’t found the fence.)

When Moore quotes Brown and Levinson’s (1987) affirmation that “people cooperate (and assume each other’s cooperation) in maintaining face in an interaction, such cooperation being based on the mutual vulnerability of face,” he puts his finger on an important distinction between neurotypicals and ASDs, in that two NT people from the same culture assume a set of information that is appropriate to discuss accompanied by a shared conviction that to stray from this set would be embarrassing to one or both parties.

People on the autism spectrum, however, don’t have access to this set of information and are hampered in our ability to divine appropriateness. We do not assimilate it as children the way NT individuals do. We don’t construct the natural barriers that prevent people from stepping outside the bounds of this set, the very barriers that prevented the Rockwell engineers from laying down a blunt “no-go” to NASA. It isn’t that they didn’t want to. They simply couldn’t; to do so would have been an extreme breach of cultural protocol so deeply ingrained in NTs that it is virtually impossible for them to break.

With regards to avoiding detrimental communications in the future, Moore discusses standardizing language and creating more robust protections for whistle blowers, both of which are important and workable solutions. But I couldn’t help but consider whether or not installing individuals on the spectrum into positions where blunt transmission of information is critical might not be useful, even lifesaving. A lack of the shared politeness barriers that can make people with autism difficult to be around also endows them with an important advantage over their neurotypical peers in certain situations.

It’s an interesting thought exercise to wonder, if one of those Rockwell engineers had had Asperger’s, would his doubts about the safety of the launch been transmitted more directly? (Possibly to his detriment, of course, but one of the perks of being on the spectrum is that such consequences are rarely anticipated.) It has been suggested by some that autism is the selection of a particular set of traits that are suited to particular environments; might this not be one of those environments?

Back to the sign in the hallway. Since there weren’t any doors to my right, I turned to my left, and there was a second door, which was open. It was at that point that I realized that the open door was, in fact, the second door on the right, as one was walking down the hallway. But as I have mentioned often, those of us on the spectrum navigate a context-free world. Where the door might have been in reference to my position as I was walking down the hallway vanished soon as I stopped to read the sign. It’s a small but important difference. When asked whether I have a sense of direction, I like to say that when I turn, the whole world turns with me. I can’t visually orient myself in a space; it’s just one of those things my brain doesn’t do.

If I had written the sign, I would have drawn an arrow pointing in the correct direction and written, “Please use the second door,” without right or left designators, because I would have imagined myself in that very spot and wouldn’t have wanted someone like me to be confused. Using the arrow stamps out any potential for misinterpretation as to the direction.

And when misinterpretation is a matter of life or death, perhaps someone unconstrained by cultural associations is exactly the person you want doing the communicating.

I am a late-diagnosed, high-functioning autistic living with chronic pain. I started this blog in March of 2014 as a way to try to process what was happening to me. It is my hope that by sharing it with you, we can both gain something, or at least learn something, from my experience.
View all posts by C. M. Condo →
This entry was posted in Setting 2 and tagged actuallyautistic, ASD, Aspergers, autism, life or death, unique, usefulness, work. Bookmark the permalink.

This site uses Akismet to reduce spam. Learn how your comment data is processed.